sharing the redeeming love of Christ with the unreached

Paw Air and his family have expressed over the past few months that they desperately want to begin reaching their neighbors and beyond with the Good News about “Pra Yesu”, Jesus. In just a few months, they have already started their own house church meeting, and we have been going out with them to reach new villages and families. We regularly meet with him and his family to teach Bible stories so they can go out and share with the people as God leads them.

Our van rounds a turn and clutters of houses give way to green rice fields scattered with workers in straw hats. It’s not long down the road until we come upon Paw Air’s house. We pull into the dusty dirt driveway, hoping that the van would still be able to get out of the big rut after our meeting. The story of the prodigal son is the lesson for today. Once Paw Air is able to tell the story well, we get into the van to go pray for the people who have reached out for us to come.

Our first stop is with a man who recently had a stroke and is unable to use the left side of his body. As we meander down the dirt road to his home, I wonder how much further the van will be able to go. Just as I am having this thought, the team says, “It’s right here.” We pull into their property and get out of the car. We came to pray for this one man, but the whole extended family happens to be there when we arrive. We all sit down in a circle, as the family gathers around. Brian, along with some of the team of Thai believers, begin to share the story of the prodigal son with them. We start to sing worship songs in the local dialect, some even written by the believers themselves.  The family seems very open and joins in together with us. God’s presence is tangible and you can see a deep humility and hunger in their faces to receive what we came to bring them. As they hear the truth about Jesus, their hearts are wide open. Four of them decide right there that they want to know Jesus personally and follow Him. We pray with them and they put their faith in Jesus, leaving their old lives behind and coming into the presence of their Father. With joy in their eyes they ask to be baptized, and we baptize them. One of the men we just baptized asks if we could bring Jesus to the people of the village where he lives. We eat lunch with this family and we are off to the next house. 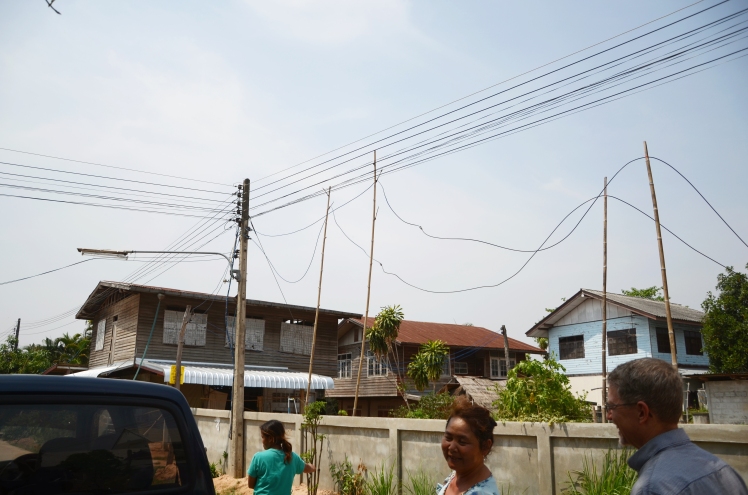 A mom had reached out to Paw Air and his wife; she told them that her son had fallen into a drug addiction. She had tried everything, even paying monks to chant over him, but it only made things worse. We set out to their house. We walk into their simple Isaan home, the 20 year old son, who we meet stark naked, throws on some clothes and sits down full of anticipation. God was already drawing his heart. We begin to share in a similar manner as the house before, and to our astonishment the son says he believes. He was ready to be done with the life he now found himself in, and embrace the Father like in the story. He too gave his life to Jesus and was baptized!

God loves people. He loves the Isaan people. How incredible that so many lost sons and daughters are coming home to Dad!

We now have more than twenty groups meeting in homes. We are on the brink of an explosion of God’s kingdom in Isaan. The people here are literally waiting to know Jesus! They are a people for Jesus, ripe for harvest!

“Don’t you have a saying, ‘It’s still four months until harvest’? I tell you, open your eyes and look at the fields! They are ripe for harvest.” (John 4:35 NIV)

Two weeks have passed since this day and we are so excited to have heard the man who couldn’t move the left side of his body is completely healed! Praise God! The day after he was baptized, one of our team leaders went back to where he was staying and taught him more about Jesus. She also taught him how to share his faith with other people, and he has gone back to his village in another province and has been sharing the love of Jesus with his village and family. Also, that 20-year old drug addict completely surrendered his life to Jesus, and two weeks later he is still going so strong in Christ, and he is hungry for more! We plan on visiting with him this Wednesday to teach him more about Jesus and help him get started in reading his Bible and sharing his faith. Please pray for them.

One thought on “A people for Jesus”